I get asked what is so interesting about building dog kennels - after all, it's just a 'box to put dogs in' - right?

We have spent years watching dog behavior, listening to the people who use the kennels everyday, and studying how the kennels are used. Interestingly enough, the kennels are not used exactly the same by all industry types! For example, a veterinarian might use a kennel short-term as the patient sleeps off the affects of anesthesia - while an animal rescue might use the same kennel for long-term housing, waiting for adoption. While we still need the kennel to function the same (it needs to safely and securely house the animal), there are some minor differences that may make a kennel better suited for each scenario. An animal rescue might want a glass window in the gate to better display the rescued dog inside - while the veterinarian doesn't really need to see as much.

Another interesting aspect of the job is understanding dog behavior in relation to how they interact with the kennels. Some dogs don't mind being in a kennel - but others are very nervous and anxious when in a kennel. We learned that some of this anxiety can be reduced if the dog is in a larger kennel. Some dogs calm down when they can see out of the kennel - others don't. Some dogs get scared when other dogs walk in front of their kennel - even if just a few minutes before they were playing together in an open play-yard. There seems to be a sort of territorial instinct that kicks in when the dogs are contained in a smaller space.; 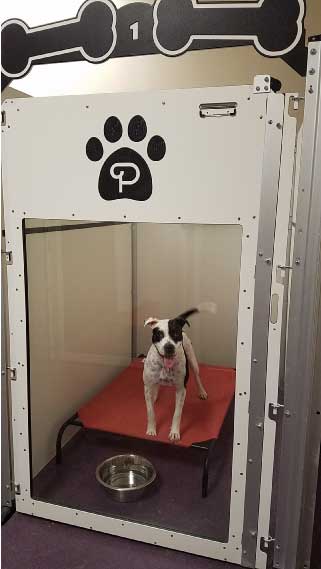 Coupled with the behavior is the desire for most dogs to want to escape the kennels. They don't really understand why they are inside these spaces. They know there was a way in - so there must be a way to get out. The first area the dogs try to escape is the gate - after all that was how they were put into the 'box' in the first place! They check out every inch of the gate for any weak-spots. The weak spots can be anything - a loose weld, a latch that wiggles, a hinge that squeaks. Once they find this 'weak-spot' they play with it - some can play for hours - until they finally get bored, or they find a way out. This behavior puts a lot of strain on each and every component of the gate. The gate is the most complicated part of the kennel and we have to not only pay attention to how each part functions - but we also have to be aware that the dog inside has nothing better to do than to find a way to break it.

Sometimes the dogs look at other parts of the kennel. Quite a few clever dogs have figured out that if they can climb, there may be ways to get over the walls of the kennels. Dogs do not have hands or thumbs, so their ability to climb is limited. They need places they can get a purchase - either on the kennel itself or something else placed inside the kennel (like a bed, toy, or other items). We found by making the kennel walls as smooth as possible, the dogs' ability to climb is reduced.

All of these aspects are scrutinized and our engineers spent years tweaking, designing, and changing minor aspects of the kennels to:

Next week we will look at how these findings help us make the kennels better! Follow us on Facebook or sign up for our newsletter as we continue our series about our kennels. Feel free to give us feedback on our Facebook Page!