"Did you know that the Australian Shepherd is descended from a line of Europe’s finest herders?"

The Aussie’s world tour began in Europe, near the Pyrenees Mountains. It was here, in the borderlands between France and Spain, where the indigenous people known as the Basques built their centuries-old reputation as world-class shepherds. Their herding dog of choice was called the Pyrenean Shepherd, progenitor of our modern Aussie.

In the early 1800s, Australia’s Anglo émigrés began a push into the continent’s vast interior in search of rich pastureland for cattle ranching. Eventually, many Basques, with their faithful shepherd dogs in tow, sailed east to try their luck on the virgin Australian continent, a wide-open paradise for sheep herders.

During their long sojourn in Australia, the Basque shepherd refined their dogs with judicious crosses to Australia’s British imports, Collies and Border Collies, among them. After building up their flocks, the intrepid Basques left Australia for greener pastures—literally—and set sail to California.

California ranchers admired the Basques’ herding dogs and assumed they were an Australian breed—thus the misleading name Australian Shepherd. Aussies, further refined and perfected in America, have been an iconic part of cowboy culture ever since. Many are still happily herding in the American West, others earn their feed as rodeo performers, and still others of this exuberantly versatile breed work as therapy dogs, drug detectors, service dogs, and search-and-rescue dogs. The Australian Shepherd entered the AKC Herding Group in 1993.

Early socialization and obedience training are both musts for the Australian Shepherd. One of the most frequent reasons Aussies end up in rescue situations is owners couldn’t (or wouldn’t) constructively channel the breed’s boundless energy through training. Aussies bond strongly to their families and so can be territorial and overprotective of their owners’ property, and they can become destructive if left without companionship for long periods too often. Fortunately, that loyalty combined with the breed’s keen intelligence and high energy makes them very easy to train. Australian Shepherds love to romp with children and tends to get along well with other pets. Australian shepherds are great family pets, herding animals, police dogs and competitors in obedience trials.

A high-energy, athletic dog, the Aussie needs a great deal of exercise on a daily basis. At minimum, he should have a large, fenced-in yard to run around in for at least an hour or two daily. Aussies bond closely with their owners and love to accompany them on long walks—or, better yet, hikes. Once an Aussie leaves puppyhood behind, and his skeletal system is fully formed, he can make a great running companion. The best course, however, is to give the Aussie a job, whether that is herding livestock, shepherding children, or competing in canine events such as obedience, herding or agility trials, or dock diving.

In general, weekly brushing sessions will keep the Australian Shepherd’s waterproof, double-layer coat looking its best. During shedding season, though, more work will be required. During this period an undercoat rake can be used every two or three days to remove the abundant dead hair, followed by a cleanup with the wire brush. Aussies often work and/or play outdoors, so it’s not unusual for them to come in dirtier than they left. But unless they’ve gotten into a particularly messy situation, they require a bath only occasionally. As with all breeds, the Aussie‘s nails should be trimmed regularly. 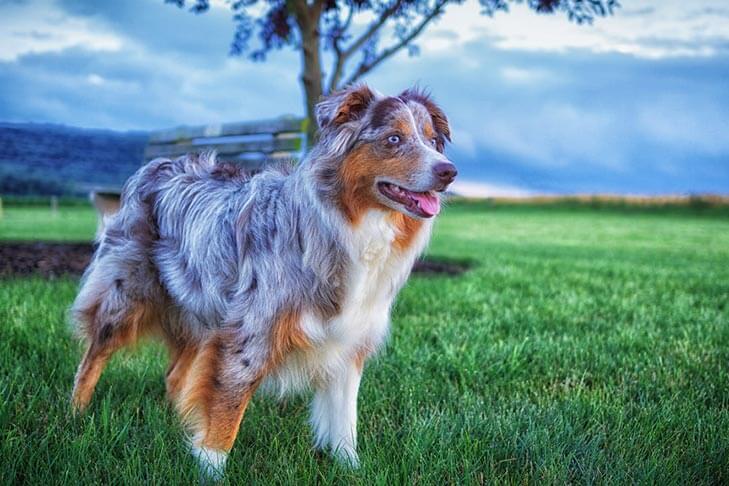 The Australian Shepherd should do well on a high-quality dog food, whether commercially manufactured or home-prepared with your veterinarian’s supervision and approval. Any diet should be appropriate to the dog’s age (puppy, adult, or senior). Some dogs are prone to getting overweight, so watch your dog’s calorie consumption and weight level. Treats can be an important aid in training, but giving too many can cause obesity. Learn about which human foods are safe for dogs, and which are not. Check with your vet if you have any concerns about your dog’s weight or diet. Clean, fresh water should be available at all times.

Aussies are generally healthy dogs, but they can develop certain health problems, including hip dysplasia, various eye diseases, sensitivity to certain drugs, and epilepsy. Hip dysplasia is a genetic malformation of the hip socket. An Aussie’s ears should be checked regularly to remove foreign matter and avoid a buildup of wax, and his teeth should be brushed regularly.

Create an account with us and you'll be able to:

Fill in your email below to request a new password. An email will be sent to the address below containing a link to verify your email address.