The Irish Wolfhound’s long history goes back to antiquity and over the centuries has acquired a patina of myth and legend.

It can be reliably stated that the Irish Wolfhound was created by breeding the indigenous large dogs of Britain to the Middle Eastern coursing hounds that were bartered around the known world in the earliest days of international trade.

By the time the Roman Empire had gained a toehold in the British Isles, the giant hounds of Ireland were already long established. In the year 391 the Roman consul received a gift of seven of these hounds that “all Rome viewed with wonder.” These majestic hunters, whose motto was “Gentle when stroked, fierce when provoked,” were used on such quarry as the now-extinct Irish elk, a massive, ferocious beast said to stand six feet at the shoulder.

In 15th-century Ireland, wolves were overrunning the countryside. The Irish hounds, already renowned big-game hunters, began to specialize on wolves. By the late 1700s, when wolves and other big-game animals of Ireland were hunted to extinction, Irish wolfhounds lost their job and nearly went extinct themselves. This was a case of a breed doing its job too well for its own good.

In 1862, British army captain George Augustus Graham began scouring the country for remaining specimens of Ireland’s national hound. Graham made it his life’s work to protect, standardize, and promote the breed, and today his name is still spoken with reverence wherever IW fanciers gather. Among the many Irish legends inspired by the breed is the melancholy tale of loyalty and remorse “Gelert, the Faithful Hound.” 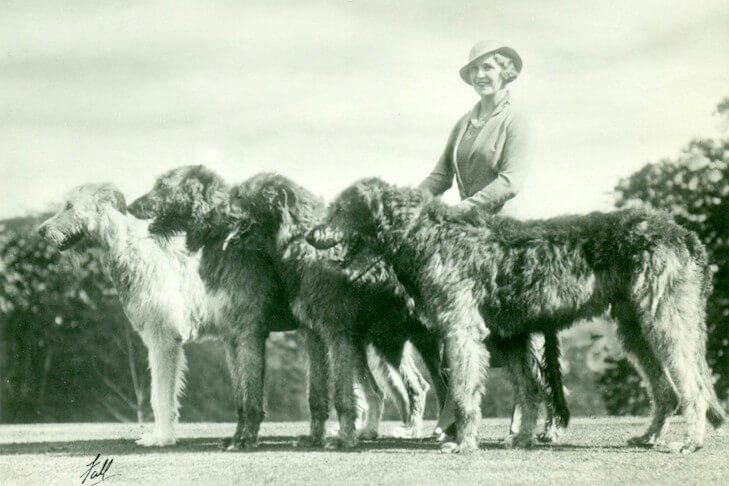 Intelligent and gentle, the Irish Wolfhound has a strong desire for human companionship. With his family, he's calm, dignified, and responsive. He's sensitive and must be trained using positive reinforcement such as praise and food rewards. Like every dog, the Irish Wolfhound needs early socialization — exposure to many different people, sights, sounds, and experiences — when they're young. Socialization helps ensure that your Irish Wolfhound puppy grows up to be a well-rounded dog.

Wolfhounds need exercise throughout their lives. Because they retain a strong instinct to hunt and chase prey, they should only be allowed loose in areas that are securely fenced, and any walks must be taken on a leash. As adults, Irish Wolfhounds can become couch potatoes if allowed to, but regular exercise such as long walks or play sessions will help keep them physically and mentally healthy. A home with a fairly large fenced area is necessary to provide the kind of environment in which they can thrive. The breed can also exercise mind and body by participating in canine sports like tracking, agility, and lure coursing. 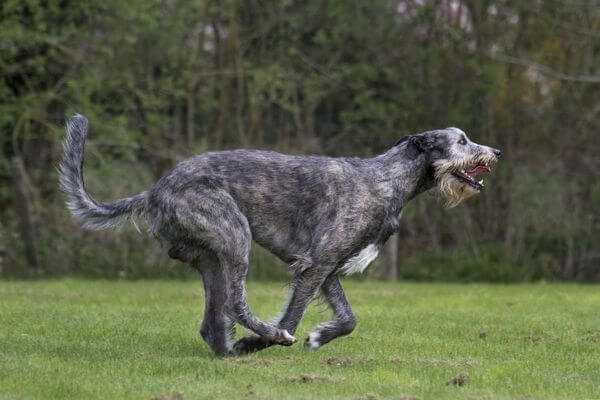 Irish Wolfhounds have a double coat that consists of a harsh, wiry outer coat covering a soft undercoat. They shed throughout the year, but not to an excessive degree. A thorough brushing once a week will help to remove dirt and loose hair and keep the dog looking his best. Unlike many double-coated breeds, Irish Wolfhounds don’t “blow out” their coats during an annual or semi-annual shedding season.

Irish Wolfhound often do well eating animal protein sources such as chicken, fish, and eggs. They can eat grains such as pearled barley, oatmeal, and brown rice.

Irish Wolfhounds are generally healthy, but like all breeds, they're prone to certain health conditions. Not all Irish Wolfhounds will get any or all of these diseases, but it's important to be aware of them if you're considering this breed.